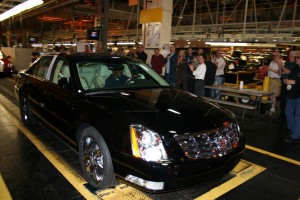 Last week saw the end of production for the Cadillac DTS full-size luxury sedan, which has sat atop Cadillac’s luxury sedan lineup since its 2006 introduction with its predecessor, the DeVille, occupying the spot for decades before.  The final DTS off the line at Cadillac’s Detroit-Hamtramck plant is going to the collection of Nicola Bulgari, the vice chairman of the Bulgari luxury goods company.

Bulgari is an avid Cadillac collector, already owning sixteen other cars from Cadillac and LaSalle, Cadillac’s companion brand from 1927 to 1940.  The collection is an interesting blend of classic and modern Cadillacs, including a 1947 and 1949 Model 7533 Limousine that was part of the Pope’s motorcade, a 2009 Cadillac XLR-V with a custom Bulgari speedometer, a 1970 Coupe DeVille, and a 2010 Cadillac CTS Wagon.

Bulgari developed his passion for automobiles, particularly American automobiles, as a child growing up in post-World War II Italy. He remembers seeing U.S. soldiers and dignitaries driving all makes and models of American automobiles through the streets of Rome. His collection includes every GM model made in 1941, the year he was born.

“It’s something that goes back a long time,” Bulgari said. “It started when I was 5 or 6 years old. It cultivated an incredible passion that has grown and gotten more sophisticated as I’ve come to understand the history better.”

When he was 25, Bulgari bought his first Cadillac – a 1938 Cadillac V-16 Town Car. With its smooth, powerful engine, the Cadillac V-16 is considered by most experts as one of the finest automobiles of all time. Bulgari has sold his V-16 but said he would add another to his collection if he found the right one.

“It was quite an experience to drive that car because the quality was second to none,” Bulgari said. “The suspension design, the power, the engine… Everything was built with extraordinary quality.”